Today we continue with the Epic of Gilgamesh as he travels across the middle east into the cedar forests of Lebanon to battle the fearsome face of Nature itself, the terrifying lord of the forest, Humbaba. Yes, he has a silly name, but he wields the forces of nature as weapons and guards over the valuable cedar trees of Lebanon. It is an action packed episode of man vs nature as we continue the adventures of Gilgamesh and Enkidu.

Now, I quite explicitly skip over a very, very long section of religious worship that occupies the majority of tablet three, mentioning that there are other places one can go to find the details of ancient Sumerian religious ritual. As a non-believer in the reality of the Sumerian gods, I find the endless praise to them dull and it does very little to enhance the story, though one could argue that it gives it a certain amount of flavor. I am personally unsure how ancient audiences would have taken these section, were they the vegetables that had to be endured to get to the good parts, or did listeners genuinely enjoy these hymns of praise on their own merits? Or, more likely, were there both sorts of people in the audience. In any case, I would recommend the Sumer subreddit, which is mostly devoted to the ancient religion of Uruk.

Also  Humbaba gets described in a lot of different ways and is, for me at least, pretty hard to picture. So imagine my surprise when the apparently “official” representation is this nasty bugger. 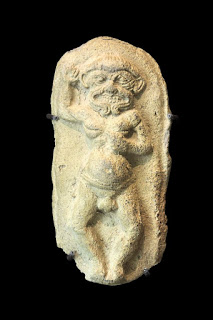 I prefer to imagine something rather more noble and exotic, and so I will.